Sue Polinsky Speaks At Next Greensboro, NC Tweet Up #gso6 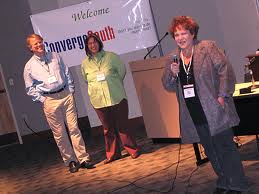 The sixth Greensboro tweet up event with Rebecca Cochran features Sue Polinsky, Principal at TechTriad and volunteer organizer for ConvergeSouth. I'm helping Sue out by hosting PitchCamp at ConvergeSouth, but as I'm new to the area I thought it would be fun to interview Sue about the origins about the big Social Media event and what's next for 2010. The hashtag for the event is #gso6.

John Cass: Would you tell me about the origins of ConvergenceSouth, how did it get started?

Sue Polinsky: In late 2004, Ben Hwang asked in IM: “Why can’t Greensboro have something like SXSW?” and my reply was, “Why not?” We put a group of 12 people together, met with A&T and I started raising money (mostly from foundations). That was January. By October, we have our first ConvergeSouth with 200 people. It was that simple and that complicated. A great idea followed by a lot of hard work.

John Cass: What has the experience of running ConvergenceSouth taught you about how to run event marketing?

Sue Polinsky: I learned the hard way the first 2 years that opening up a “free” conference draws a lot of registrations but not necessarily people who show up and that wreaked havoc with our planning. As an open event, if someone wanted to present, they could and we made room arrangements. The downside is that we had WAY too many great programs simultaneously and people couldn’t go to the ones they wanted. Back in 2005-2006, web streaming was new and we didn’t have the tools or people to capture the speakers and sessions. Over the years, we learned to winnow down the great speakers and sessions but it’s this year – 2010 – that we’re finally running “tracks” of interest and limiting sessions to 3 per hour, with two very special sessions on Saturday (Pitch Camp and Web Tech Shoot-out).

Each year, CS led and followed cutting-edge trends. 2005 focused a lot on blogging and 2006 on news/blogging. We worked with NORGs (national news organizations) and ran sessions that focused on each – online creativity and news. We have had, over the years, a ton of headliners and have learned to streamline them.

Part of our marketing came from blog posts – Ed Cone’s popular blog, everyone else would often pick up his reminder to register for ConvergeSouth. This year, we’ve gone to Twitter and Facebook as well, but I believe word-of-mouth (or tweet) is the most effective method because one of our focuses this year is, of course, social marketing.

Greensboro is a small-business town. Although there are numerous higher-level social media discussions to be had, we are trying to offer what just-starting small businesses need (in social media); that is, how to get started, while at the same time not neglecting those with more significant social media backgrounds. It’s a balance and it’s how you choose your presenters.

John Cass: How do you think social media supports events?

Sue Polinsky: This is the first year (because we skipped 2009 and social media exploded during that time) we’re relying more heavily on Twitter, Facebook and the like but in 2007, Andy Coon ran the first and most successful video contest almost completely on YouTube and Facebook. Andy was way more ahead of many of us in that venue and his incredibly hard work produced a hugely successful part of the conference. He never got enough credit for everything he did.

John Cass: How do you find headliners for your events? And who were some of your best speakers and why?

Sue Polinsky: Our first year, 2005, saw a lot of headliners, all in a “bloggercon” format, where no one was really a headliner, but attendees got to go to small presentations led by or attended by headliners. That included Dave Winer, Jimbo Wales, Duncan Black, Amanda Congdon, Michael Moran, Sybril Bennett, Jay Rose, Ruby Sinreich, Michael Bowen and more. The most important part of ConvergeSouth is the quiet networking that happens during the off-times. Each of the “headliners” had a good time and talked up the conference, which enabled us, in part, to get Robert Scoble in 2006 and again in 2008. He’s the pied piper: people showed up just to meet him and he’s the most gracious and outgoing geek I’ve ever met. Choosing a headliner is doubly hard: ConvergeSouth doesn’t pay speaker fees (although we do pay travel). It’s our mantra: you have to want to be here. This year, we’re lucky to get Brent Payne as the keynoter and we’re crossing our fingers that Craig Newmark can join us virtually for a “Conversation with Craig Newmark.” He’s incredibly busy and overbooked; we’re hoping he can be with us and be interviewed by Kevin Briody.

John Cass: A question about logistics, how important is logistics to the running of a major event?

Sue Polinsky: A nightmare! Because we started with no money, we worked with NC A&T State University and set a model for future conferences to partner with a University that can provide classrooms, projectors, huge bandwidth and reception areas. The School of Journalism and Mass Communication at A&T is simply the best partner to work with – the most gracious and generous I’ve ever met. But as a University, the most basic issue – parking – is a nightmare. We have – and will continue to run – shuttles from downtown hotels to the University on Friday (Saturday parking is easy when we don’t schedule the same day as a home football game). We have to be concerned with accessibility for everyone so the University shines on that playing field as well. Bringing in food and beverages is simply a schlep and we have volunteers who do that, but A&T generously allows us to use our own caterer (for breakfast and box lunches) and they have staff that handles most of the heavier, messier stuff (like tubs with ice and bottles of water/soda).

Once you get into the A&T facility, it’s absolutely fabulous. Most rooms are “smart” and have permanent projectors and internet connections. We have two serious geeks who are our tech support and carry a bunch of Mac-video adapters for presenters who bring their own Mac computers. (We learned that the hard way in year one.)

The tech side of the conference is also run by volunteers and that’s why when we were new, we didn’t ask for users’ files and unfortunately can’t share them now. We’re asking for them this year.

John Cass: Looking ahead to October, can you tell me about the focus of the upcoming conference?

Sue Polinsky: Our focus is threefold: Individuals, Small Business and Developers with social media underneath of a lot of it. We have an economy with job seekers and a lot of new small businesses, all eager to get into social networking but a little clueless about how to start. Our small businesses are often too small to do their own effective social networking – so what’s the plan for them? We hope to address that. Our developers are going to have a ball with iPhone, iPad, Windows Mobile and Android developers plus a heavy dose of WordPress for developers (and another session for users) led by John Ford, who is, among geeks, the crown jewel in Greensboro.

Pitch Camp is – in its first year – promising to be “The Next Food Network Star” with class and terrific pre-planning and the Web Tech Shoot-out is organized by Tammy Colson, based on a model she has experienced in other forums.

We always focus on creativity online for everyone – we take a little pride in having the most diverse conference and bringing top talent to a place in Greensboro where you can eat with, chat with, shake hands with, exchange business cards with, and otherwise meet some of the movers and shakers who are going to shape our technology.

Everyone can register at http://www.convergesouth.com. We have reasonable prices and a $10 ticket for low-income or students with NO questions asked. We’re still working on getting notables for the big (first-time) Saturday lunch/panel discussion and have commitments from Rep. Brad Miller, Rep. Howard Coble (tentative) and Sen. Don Vaughn. We’re seeking to enlarge that panel (which will be moderated by John Robinson) on the topic of “Internet Legislation.” I think that’s going to be a winner; there’s just a lot of hard work getting politicians to respond!

Sue Polinsky Speaks At Next Greensboro, NC Tweet Up #gso6

The sixth Greensboro tweet up event with Rebecca Cochran features Sue Polinsky, Principal at TechTriad and volunteer organizer for ConvergeSouth. I'm helping Sue out by hosting PitchCamp at ConvergeSouth, but as I'm new to the area I thought it would be fun to interview Sue about the origins about the big Social Media event and what's next for 2010. The hashtag for the event is #gso6.

Blog powered by Typepad
Member since 08/2003